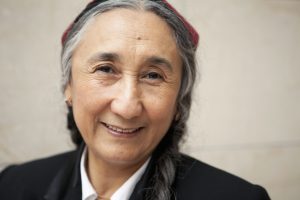 Rebiya Kadeer is the most prominent human rights advocate and leader of the Uyghur people. Currently she is serving as Special Leader of the WUC. Ms. Kadeer is the mother of eleven children, and a former laundress turned millionaire. She spent nearly six years in Chinese prisons for standing up to the authoritarian Chinese government. Before her arrest in 1999, she was a well-known Uyghur businesswoman and at one time the seventh wealthiest individual in the People’s Republic of China.

Ms. Kadeer is a philanthropist, and a political activist.  She built up and ran a multimillion-dollar trading company and a department store in Urumqi, capital of East Turkestan (also known as Xinjiang Uyghur Autonomous Region, XUAR).  She was passionate in helping out down-trodden Uyghurs, especially women and children.  In order to educate Uyghur children from poor families, she opened free classes using space in her department store. She started the “Thousand Mothers Movement in December 1997, to empower Uyghur women to start their own businesses.  Ms. Kadeer’s philanthropic efforts were at first praised by the Chinese government. She was appointed a member of the Political Consultative Congress in 1992, and a member of China’s delegation to the United Nation’s Fourth World Conference on Women in 1995.

Initially, Ms. Kadeer hoped to improve the situation of the Uyghur people by working within the Chinese state system.  She tried to persuade high-ranking Chinese officials, including China’s president, to change their hard-line, repressive policies against the Uyghurs. Beijing’s attitude toward Ms. Kadeer changed when she criticized China’s treatment of her people during a National People’s Political Consultative Conference session in March 1997.  In her speech, she demanded that the Chinese government honor the autonomy conferred on the Uyghur people and respect their human rights. She strongly criticized China’s harsh crackdown of the Uyghur student demonstration, which had taken place a month earlier in Ghulja City.

To punish Ms. Kadeer for her disloyalty to the Chinese Communist Party, she was stripped of her membership in the Political Consultative Conference and forbidden to travel abroad.  Beijing also pressured her to divorce her dissident husband, Sidik Rouzi, who had fled to the US in 1996.

In 1999, while on her way to meet with a US Congressional delegation, Ms. Kadeer was arrested and then sentenced to eight years in prison for ‘stealing state secrets.’ Ms. Kadeer’s case became an international embarrassment for the Chinese government after Amnesty International and Human Rights Watch publicized her case and aggressively pursued her freedom. In 2000, Human Rights Watch awarded Ms. Kadeer its highest human rights award. In 2004, Norway’s Rafto Foundation honored her with the Rafto Award.  Then, on March 17, 2005, three days before an official visit to Beijing by the US Secretary of State, she was released from prison on medical grounds.

Since her release in 2006, Ms. Kadeer has been actively campaigning for the human rights of the Uyghur people and that made the Chinese government to use the most brutal measures to punish herself and her family members. Chinese authorities detained three of her children on the exact date of her election as WUC´s President in November 2006 and sentenced two of her sons to long term imprisonment. Despite Chinese government efforts to discredit her, Ms. Kadeer remains the leader and ‘Spiritual Mother of the Uyghur nation’, in whom the Uyghur people have put their hopes for the future. 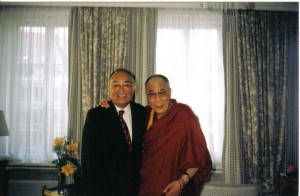 Erkin Alptekin has been effectively lobbying  not only his own peoples cause but also the cause of many other nations, peoples, minorities and the indigenous peoples in the Western countries since 1971. Thus, he became one of three founders of the Allied Committee of the Peoples of Eastern Turkestan, Tibet and Inner Mongolia, in 1985, in Zürich, Switzerland. He is still the executive president of that organization. In 1991, with the support of some of his countrymen he founded the Eastern Turkestan Union in Europe (ETUE), in Munich, Germany. In 1991, he also became one of the founders of the Unrepresented Nations and Peoples Organization (UNPO), which has its seat in The Hague, Holland.

Between 1991 and 2003, Mr. Erkin Alptekin served as the Vice Chairman, Chairman and the General Secretary of the UNPO. At present UNPO has 60 members representing almost 150 million people in the world. In 2000, together with Mr. Federico Mayor, the former Cultural Minister of Spain and Ms. Daniela Mitterrand, the former First Lady of France, he became one of the founders of the UBUNTU (Peace), in Barcelona, Spain. During a conference held April 16-18, 2006, in Munich, Germany, Mr. Erkin Alptekin was elected as the President of the World Uyghur Congress. Erkin Alptekin is also on the advisory board of several international organizations situated in Asia, Europe and in the United States.

For the last 35 years Mr. Erkin Alptekin has attended more than 6,000 international conference world-wide on various topics; published numerous articles, research papers and brochures; and has been the focus of several Western press media.

Erkin Alptekin is married and has a son. Besides his mother tongue Uighur, Erkin Alptekin speaks Turkish, English and German. He is a German citizen and resides in Germany.